What does forgiveness have to do with sacrifice? 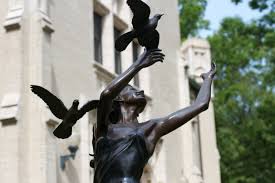 Reverend Laurel’s sermon this past Sunday (Sept 10) has continued to resonate in me. Perhaps it was because I kept struggling with the Old Testament reading for the same Sunday -  Exodus 12:1-14.  This reading recounts God’s order to Moses and Aaron to compel all the captive Israelites in Egypt to slaughter young lambs, roast, eat, and completely consume the bodies in fire; in addition, all the lintels of their homes are to be marked with blood of the slaughtered lambs.  Of course, this well- known passage frames and prepares the Passover (Pesach in Hebrew) which commemorates the liberation of the Jews out of Egypt.

Rev Laurel’s sermon however focused on the Epistle (Paul’s letter to the Roman’s 13:8-14) as well as the Gospel of Matthew (18:15-20) in which active love, forgiveness and reconciliation are to be understood as the heart of Jesus’ message and teachings.

So how is it possible to understand how the Old Testament passage from Exodus 12 has anything to do with love and forgiveness? Why is it part of the readings for that Sunday?  It’s hard to even go back and read the gory details which involve slaughter of valuable, prized animals along with details about roasting the entire body over fire to make sure absolutely nothing remains of the carcass. And this is just the beginning, for the Lord goes on to tell Moses that all unmarked-with-blood, non-Hebrew families will suffer not only the death of their animals, but their firstborns as well. In other words, initial bloodletting leads to more blood and death and includes human beings the 2nd time around.   This is not an easy passage to read and comment on, so I can understand why Rev. Laurel choose to concentrate on the other readings for the day.

Perhaps the only path linking the 2 testament readings for this past Sunday can be found in the notion of sacrifice. The word sacrifice itself comes from the Latin Sacra and Facere – to perform sacred rites. In common language and outside of the church liturgy, a sacrifice always involves giving something up, along with an uncomfortable feeling/perception that something is lost and no longer with us.

In her sermon, Rev.Laurel commented that the word love in English usually connotes positive feelings of happiness or excitement, not action, and that this poses a problem for contemporary Christians. She also told the story of a grandmother whose earrings were taken without permission and then lost by her granddaughter who then had trouble fessing up to the act. Rev. Laurel pointed out how inseparable active love is with forgiveness and reconciliation. It’s as if love and forgiveness are 2 sides of the same coin.

And here is where Exodus 12 and the notion of sacrifice comes back into the discussion. For if love is truly active, it almost always involves some measure of self-sacrifice which is felt initially as a loss, as something unpleasant. From this vantage point, real forgiveness is simple – it is sacrifice which is initially imposed on us without our consent by the other, and then accepted by us without the need for retribution or revenge.  Forgiveness is kind of like deferred love in reverse. What kind of story would have been written in Exodus if the Jews and their God had somehow figured out how to live in peace and integrate with the Egyptians instead of taking revenge and inflicting more pain and death?

Can we begin to reread and understand the Exodus 12 story by letting go of the barriers between Self and Other, that classic old divide between Israelites and Egyptians, oppressors and oppressed?  The final and most important question is this:  Is the world here and now as we know it even possible without sacrifice?

Sacrifice may be the only thing that keeps our universe from blowing up day to day and thus at the very heart of God’s being.