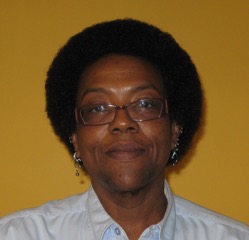 At the end of an interview, I asked Robin what she wanted people to know about her. She wants you to know she’s not intimidating or hard to get to know. The most important thing I can tell you about Robin is that she’s right. She’s open and easy to talk to about important stuff.

By profession and calling, Robin’s a teacher. She taught severely emotionally disturbed children in Denver, where she first became involved with AVID, a program to prepare children, who have been historically underrepresented in higher education, for college and careers.

In 2010, AVID transferred her to San Diego. Here she works with educators as a program specialist in staff development. She works with teachers and coaches them on how to recognize, respect, and teach through cultural differences.

When a friend invited her to St. Luke’s a little over a year ago, Robin found a church home. She is drawn to this diverse community which welcomes different races, classes, ethnicities, sexual orientations, and gender identities. St. Luke’s collective dream to be a congregation willing to endure being uncomfortable as God calls us to welcome strangers and differences. Robin welcomes being part of a congregation brave enough to grow and transform through that openness.

Robin supports St. Luke’s with her gifts of reading, teaching, singing, advocacy. She reads lessons in church, helps with Sunday School and the Youth Group, sings with the Martin Luther King, Jr. Community Choir, and works to create spaces for others to be able to speak for themselves.

At St. Luke’s, Robin continually asks herself the question “How does who I am and what I bring help or hinder this relationship?” A question I now hope to remember to ask myself.

Her daily spiritual life means entering her work and other activities with prayer. As an AVID representative, Robin is aware of God’s presence when she’s in critical conversations with other educators around issues of equity and/or race. As she described her sense of being outside of herself in these conversations and when she reads Scripture in church, the verse “I have put my words in your mouth” (Isaiah 51:16) came to mind. Robin also feels the presence of the divine with song.

Conversation with Robin is a wonderful experience. I felt our hearts spoke and responded. When she says she wants you to know that she’s not hard to get to know, believe her. She wants people to be able to walk through the world without fear, which sounds to me an awful close to what angels talk about. So if you don’t know Robin yet, introduce yourself.