Simplicity & Mystery (Part 2): Stepping out with the G-word

I think we need to be honest about how uncomfortable it is to talk about God. 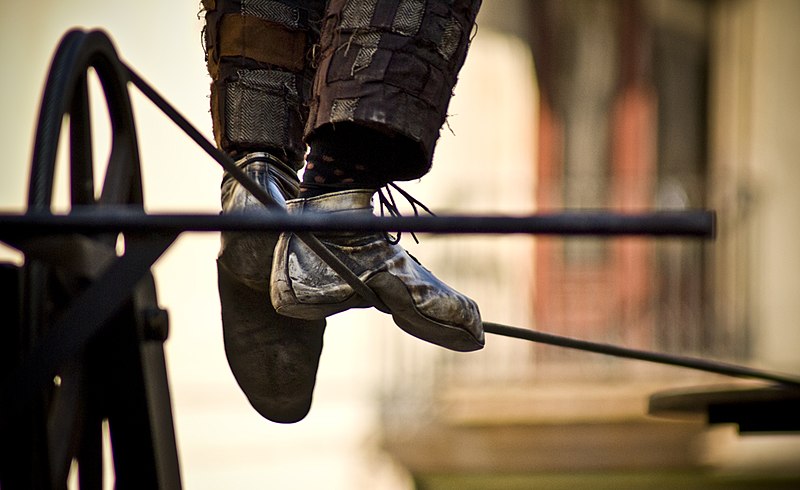 I can’t speak for other cultures, times, contexts, but I have known in my gut from about age 15 that as a word -- intended for communication, connection -- “God” doesn’t work very well in the United States.

Let’s return to the tightrope metaphor from yesterday. If all conversations about things that matter are exercises in walking on a line strung between the poles of absolute mystery and absolute simplicity (or, I suppose, certainty), then anytime we invoke the name of/ word of “God” we are walking on that line. That’s where I am, anyway. It’s where I think most people who would say they trust in God are. But I always feel like the popular use and understanding of “God” imagines that people who use that word are just happily dancing on the pole of certainty.

It’s like God is a concept, a word, that should span the whole length of the tightrope, but instead has begun to be conscripted to one very short fragment on the simplicity/ certainty side. It’s like the ridiculous joke about God as an old man in the sky started to dominate the conversation, and the sad result is we have millions of people who think that’s all the word ever means. There is a reason that books about faith at home have to start with chapters on “Talking about God,” and why I’m starting with words. We have to be clear(er) about what we mean when we say, “God:” or at least, I want to be clear that when the word God enters the conversation, we are still on the tightrope between simplicity and mystery. It is a vast expanse. The small word “God” ideally signals the biggest sweep of reality, not the smallest space of human closed-mindedness.

I’m talking a big talk, here, but I still feel how far we are from that imaginary ideal of common understanding every time I open my mouth to say I am a priest; every time I shy away from using the word because I think I will be misunderstood. But I don’t think there is a better word. It’s roots in English are deep. So, what to do? I’m hoping people who trust in God can help lead a mini-reformation of how this word is heard, what it signals.

Maybe we can take cues from the 7th century historian Bede and simply be clearer that what we are inviting people to embrace is the mystery of faith, the full line: we are inviting a step off the pole of pure mystery, where nothing can be said, trusting that there is indeed another pole of simplicity, things we might know and say with truth, even about God. Writing of Aidan, the saint who shared the Christian witness in Northern England, Bede says this: “He invited them to embrace the mystery of faith.”

My hope for St. Luke’s is that it might be a space where people can express themselves honestly from any point along the the line between simplicity and mystery. I don’t know of a human who doesn’t walk that line when it comes to talking about God, but we do (unfortunately) have a nasty habit as humans of conscripting conversations  -- and conversation partners -- based on our desire for comfort and familiarity. This wide space maybe isn’t for everyone. Some people prefer absolute simplicity, others the silence of mystery. But if you’re open to exploring the nature of God with words and actions, open to hearing people talk about Jesus showing up in their prayers as much as you’re open to hearing people talk about feeling alone in the universe, then I hope we can create a culture in churches across America where that sort of counter-cultural conversation happens. Can you imagine if this kind vast space around the word of “God” spread to the family dinner table?

That would be a true revolution. I hope I live to see it.